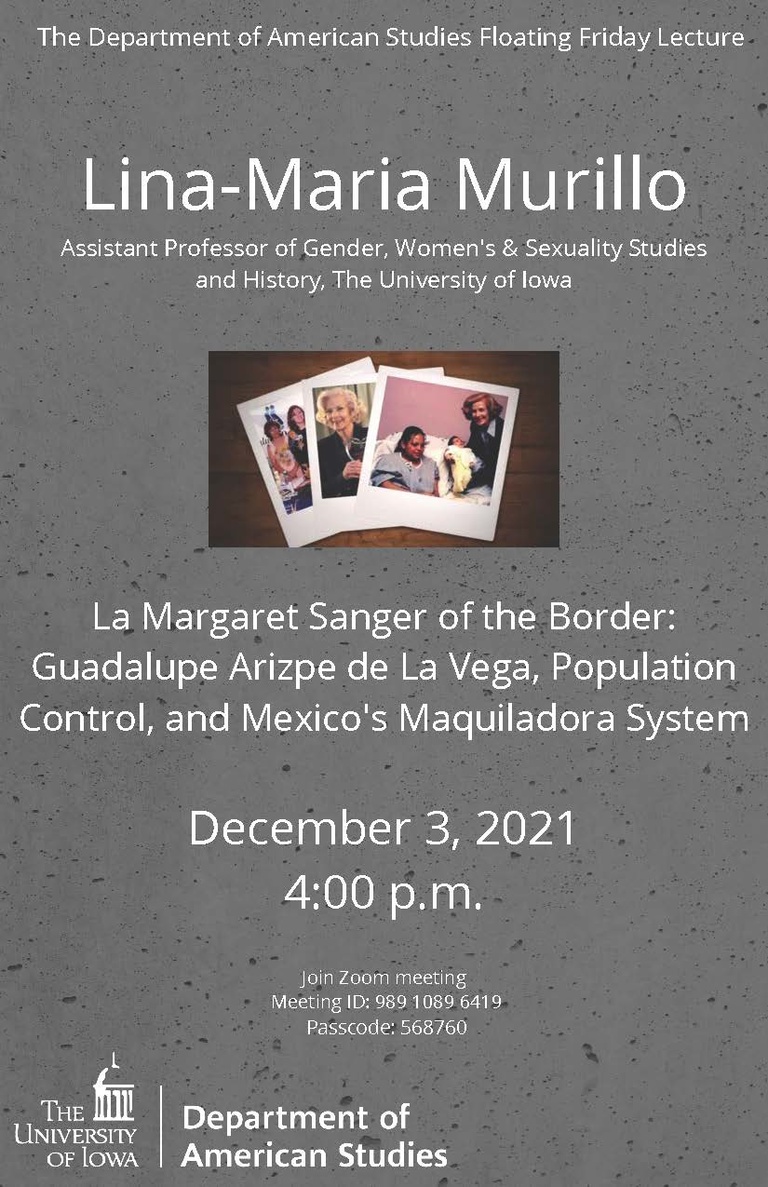 Grounded in an intersectional analysis of class, race, gender, and citizenship, this lecture is an examination of the resilience of racialist population control ideology among well-financed birth control groups on both sides of the U.S.-Mexico border. Residents in the El Paso-Ciudad Juárez borderlands traveled in both directions, across international bridges, seeking affordable healthcare for decades. In 1973, after decades of work, Guadalupe Arizpe De La Vega, a philanthropist and devout Catholic, opened the first birth control clinic in Ciudad Juárez with help from Planned Parenthood of El Paso (PPEP). In De La Vega, the population control community found its ultimate champion, a wealthy, well-connected, Catholic, Mexican woman. Although many supported her charity, few knew it was supported by her husband's passion--the expansion of maquiladora systems across Mexico's northern frontier. Often called the Margaret Sanger of the border, De La Vega personified the synthesis of nearly 50 years of population control activism in the borderlands. She worked closely with PPEP to curb overpopulation south of the border “worse than in the streets of Calcutta” and to provide a steady stream of women workers to her husband's factories. De La Vega’s Federación Mexicana de Asociaciónes Privadas (FEMAP) provided reproductive healthcare and medical care along Mexico’s northern border. Again, though the discourse was widely focused on population control, FEMAP became a primary healthcare provider for low-income borderland residents, as people residing in El Paso often traveled south for less expensive medical treatment into the twenty-first century.

Lina-Maria Murillo received her doctorate in Borderlands History at the University of Texas at El Paso (UTEP) in 2016. She received her M.A. in 2011 from UTEP and her B.A. in History and Raza Studies from San Francisco State University in 2007. She is completing her manuscript titled Fighting for Control: Race and Reproductive Rights Activism in the U.S-Mexico Borderlands. Describing the clinics, organizations, and institutions that helped to foster access to reproductive care along the border in the twentieth century, this history reveals the tensions between advocates for population control and those committed to greater reproductive rights for the majority Mexican-origin women in the region. The study focuses on the history of Planned Parenthood along the line and shines a light on the unknown history of abortion, population control, and Chicana activism that comprised the movement in the borderlands.

For her next project, Murillo is writing the biography of the unknown abortion rights activist Patricia Maginnis, who in the years before Roe v. Wade established a well-organized abortion network across the border. This biography will center Maginnis in the creation of NARAL (National Association for Repeal of Abortions Laws) and in facilitating the work of other abortion referral services like the National Clergy Consultation Service on Abortion and Abortion Counseling Services. It also looks at the underground abortion specialists that dominated this illegal economy in border towns across Mexico’s northern territories. A truly transnational tale, Murillo seeks to show how everyday people on both sides of the national divide risked their livelihoods and lives to secure women’s autonomy and reproductive freedom. Additionally, Murillo focuses on the intersections of reproductive freedom, race, gender, class, and sexuality, as well as immigration and Latina/o/x subjectivities.